One should avoid the temptation of the narcissism of the lost cause, of admiring the sublime beauty of uprisings doomed to fail. What new positive order should replace the old one the day after, when the sublime enthusiasm of the uprising is over? It is at this crucial point that we encounter the fatal weakness of the protests: they express an authentic rage which is not able to transform itself into a minimal positive program of socio-political change.

by Slavoj Žižek - The Guardian 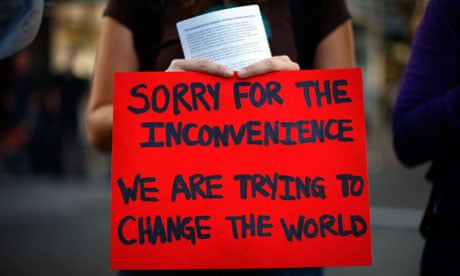 What to do in the aftermath of the Occupy Wall Street movement, when the protests that started far away – in the Middle East, Greece, Spain, UK – reached the centre, and are now reinforced and rolling out all around the world?

In a San Francisco echo of the OWS movement on 16 October 2011, a guy addressed the crowd with an invitation to participate in it as if it were a happening in the hippy style of the 1960s:

"They are asking us what is our program. We have no program. We are here to have a good time."

Such statements display one of the great dangers the protesters are facing: the danger that they will fall in love with themselves, with the nice time they are having in the "occupied" places. Carnivals come cheap – the true test of their worth is what remains the day after, how our normal daily life will be changed. The protesters should fall in love with hard and patient work – they are the beginning, not the end. Their basic message is: the taboo is broken, we do not live in the best possible world; we are allowed, obliged even, to think about alternatives.

In a kind of Hegelian triad, the western left has come full circle: after abandoning the so-called "class struggle essentialism" for the plurality of anti-racist, feminist etc struggles, "capitalism" is now clearly re-emerging as the name of the problem.

The first two things one should prohibit are therefore the critique of corruption and the critique of financial capitalism. First, let us not blame people and their attitudes: the problem is not corruption or greed, the problem is the system that pushes you to be corrupt. The solution is neither Main Street nor Wall Street, but to change the system where Main Street cannot function without Wall Street. Public figures from the pope downward bombard us with injunctions to fight the culture of excessive greed and consummation – this disgusting spectacle of cheap moralization is an ideological operation, if there ever was one: the compulsion (to expand) inscribed into the system itself is translated into personal sin, into a private psychological propensity, or, as one of the theologians close to the pope put it:

"The present crisis is not crisis of capitalism but the crisis of morality."

Let us recall the famous joke from Ernst Lubitch's Ninotchka: the hero visits a cafeteria and orders coffee without cream; the waiter replies:

"Sorry, but we have run out of cream, we only have milk. Can I bring you coffee without milk?"

Was not a similar trick at work in the dissolution of the eastern european Communist regimes in 1990? The people who protested wanted freedom and democracy without corruption and exploitation, and what they got was freedom and democracy without solidarity and justice. Likewise, the Catholic theologian close to pope is carefully emphasizing that the protesters should target moral injustice, greed, consumerism etc, without capitalism. The self-propelling circulation of Capital remains more than ever the ultimate Real of our lives, a beast that by definition cannot be controlled.

One should avoid the temptation of the narcissism of the lost cause, of admiring the sublime beauty of uprisings doomed to fail. What new positive order should replace the old one the day after, when the sublime enthusiasm of the uprising is over? It is at this crucial point that we encounter the fatal weakness of the protests: they express an authentic rage which is not able to transform itself into a minimal positive program of socio-political change. They express a spirit of revolt without revolution.

Reacting to the Paris protests of 1968, Lacan said:

"What you aspire to as revolutionaries is a new master. You will get one."

It seems that Lacan's remark found its target (not only) in the indignados of Spain. Insofar as their protest remains at the level of a hysterical provocation of the master, without a positive program for the new order to replace the old one, it effectively functions as a call for a new master, albeit disavowed.

We got the first glimpse of this new master in Greece and Italy, and Spain will probably follow. As if ironically answering the lack of expert programs of the protesters, the trend is now to replace politicians in the government with a "neutral" government of depoliticized technocrats (mostly bankers, as in Greece and Italy). Colorful "politicians" are out, grey experts are in. This trend is clearly moving towards a permanent emergency state and the suspension of political democracy.

So we should see in this development also a challenge: it is not enough to reject the depoliticized expert rule as the most ruthless form of ideology; one should also begin to think seriously about what to propose instead of the predominant economic organization, to imagine and experiment with alternate forms of organization, to search for the germs of the New. Communism is not just or predominantly the carnival of the mass protest when the system is brought to a halt; Communism is also, above all, a new form of organization, discipline, hard work. READ MORE