READ: The Law Seems to be Completely Out of Whack With Technology 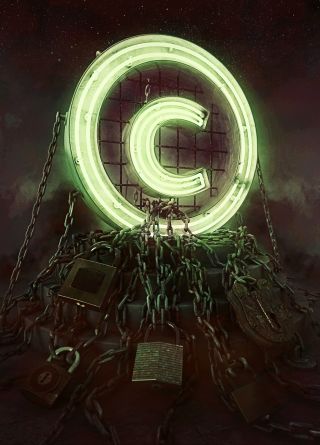 According to an organization called Tru Optik, as many as ten billion files, including movies, television shows, and games, were downloaded in the second quarter of this year. Tru Optik estimates that approximately ninety-four per cent of those downloads were illegal. The law seems to be completely out of whack with the technology.

by Louis Menand - The New Yorker

Rod Stewart is being sued over the rights to an image of his own head.

In 1981, a professional photographer named Bonnie Schiffman took a picture of the back of Stewart’s head, which was used, eight years later, on the cover of the album “Storyteller.” Now a different picture of Stewart’s head, also from the back, has been used to promote his Las Vegas act and world tour. Schiffman claims that the resemblance between her photograph and the new image is too close—the legal term is “substantial similarity”—and she is suing for copyright infringement. She is asking for two and a half million dollars.

A copyright is, first and foremost, the right to make a copy. The first products to be protected by copyright—the statutory history begins in Britain, in 1710, with the passage of a law known as the Statute of Anne—were books. Once you buy a book, you can legally do almost anything to it. You can sell it to someone else, you can tear the pages out, you can throw it on a bonfire. God knows you can print terrible things about it. But you cannot make copies of it. The right to do that belongs to the author of the book and his or her heirs and assigns.

As with any right, the right to make a copy is a lot less straightforward than it sounds. As the person who wrote this article, I own the right to make copies of it. Since 1976, in the United States, that right has been born with the article, and there are few formalities still required for me to assert it. The belief that you have irrecoverably forfeited your copyright if you have not sent a copy of your book to the Library of Congress, or put a © on it somewhere, is obsolete.

I have granted The New Yorker an exclusive license to the article for a limited period, after which the magazine retains certain privileges (including printing it in a collection of New Yorker writings and keeping it on its Web site). If, a year from now, someone else, without my permission, reprints my article in a book called “The Most Thoughtful and Penetrating Essays of 2014, ” I can complain that my right to make copies is being violated and, if the court agrees with me, legally suppress the book. Theoretically, the court could compel the publisher to pulp all the unsold copies. Although not the author of this piece, you, too, would likely feel that the publisher of “Most Thoughtful Essays” was a bandit, and you would share my sense of righteous indignation.

But suppose that a Web site, awesomestuff.com, ran an item that said something like “This piece on copyright is a great read!” with a hyperlink on the word “piece” to my article’s page on The New Yorker’s Web site. You wouldn’t think this was banditry at all. You would find it unexceptionable.

This is partly because of what might be called the spatial imaginary of the Web. When you click on a link, you have the sensation that you no longer are at a place called awesomestuff.com but have been virtually transported to an entirely different place, called newyorker.com. A visual change is experienced as a physical change. The link is treated as a footnote; it’s as though you were taking another book off the shelf. The Web reinforces this illusion of movement by adopting a real-estate vocabulary, with terms like “site” (on which nothing can be built), “address” (which you can’t G.P.S.), and “domain” (which is a legal concept, not a duchy).

Some courts have questioned the use of links that import content from another Web site without changing the URL, a practice known as “framing.” But it’s hard to see much difference. Either way, when you’re reading a linked page, you may still be “at” awesomestuff.com, as clicking the back button on your browser can instantly confirm. Effectively, awesomestuff.com has stolen content from newyorker.com, just as the compiler of “Most Thoughtful Essays” stole content from me. The folks at awesomestuff.com and their V. C. backers are attracting traffic to their Web site, with its many banner ads for awesome stuff, using material created by other people.

An enormous amount of Web business is conducted in this manner. Most Web users don’t feel indignant about it. On the contrary, most Web users would feel that their rights had been violated if links like this were prohibited. Something that is almost universally condemned when it happens in the medium of print is considered to be just how digital media work. Awesomestuff.com might even argue that no one is harmed by the link—that it is doing me and The New Yorker a favor by increasing our article’s readership at no cost to us. But the publisher of “Most Thoughtful Essays” could say the same thing, and the court would be unmoved. READ MORE