UNDERSTAND: The Mission to Decentralize the Internet 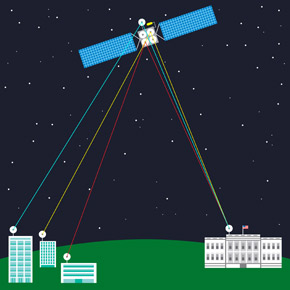 A staggering percentage of communications flow through a small set of corporations—and thus, under the profound influence of those companies and other institutions. Google, for instance, now comprises twenty-five per cent of all North American Internet traffic; an outage last August caused worldwide traffic to plummet by around forty per cent.

by Joshua Kopstein - The New Yorker

In the nineteen-seventies, the Internet was a small, decentralized collective of computers. The personal-computer revolution that followed built upon that foundation, stoking optimism encapsulated by John Perry Barlow’s 1996 manifesto “A Declaration of the Independence of Cyberspace.” Barlow described a chaotic digital utopia, where “netizens” self-govern and the institutions of old hold no sway. “On behalf of the future, I ask you of the past to leave us alone,” he writes. “You are not welcome among us. You have no sovereignty where we gather.”

This is not the Internet we know today. Nearly two decades later, a staggering percentage of communications flow through a small set of corporations—and thus, under the profound influence of those companies and other institutions. Google, for instance, now comprises twenty-five per cent of all North American Internet traffic; an outage last August caused worldwide traffic to plummet by around forty per cent.

Engineers anticipated this convergence. As early as 1967, one of the key architects of the system for exchanging small packets of data that gave birth to the Internet, Paul Baran, predicted the rise of a centralized “computer utility” that would offer computing much the same way that power companies provide electricity. Today, that model is largely embodied by the information empires of Amazon, Google, and other cloud-computing companies. Like Baran anticipated, they offer us convenience at the expense of privacy.

Internet users now regularly submit to terms-of-service agreements that give companies license to share their personal data with other institutions, from advertisers to governments. In the U.S., the Electronic Communications Privacy Act, a law that predates the Web, allows law enforcement to obtain without a warrant private data that citizens entrust to third parties—including location data passively gathered from cell phones and the contents of e-mails that have either been opened or left unattended for a hundred and eighty days. As Edward Snowden’s leaks have shown, these vast troves of information allow intelligence agencies to focus on just a few key targets in order to monitor large portions of the world’s population.

One of those leaks, reported by the Washington Post in late October, revealed that the National Security Agency secretly wiretapped the connections between data centers owned by Google and Yahoo, allowing the agency to collect users’ data as it flowed across the companies’ networks. Google engineers bristled at the news, and responded by encrypting those connections to prevent future intrusions; Yahoo has said it plans to do so by next year. More recently, Microsoft announced it would do the same, as well as open “transparency centers” that will allow some of its software’s source code to be inspected for hidden back doors. (However, that privilege appears to only extend to “government customers.”) On Monday, eight major tech firms, many of them competitors, united to demand an overhaul of government transparency and surveillance laws.

One solution, espoused by some programmers, is to make the Internet more like it used to be—less centralized and more distributed. Jacob Cook, a twenty-three-year-old student, is the brains behind ArkOS, a lightweight version of the free Linux operating system. It runs on the credit-card-sized Raspberry Pi, a thirty-five dollar microcomputer adored by teachers and tinkerers. It’s designed so that average users can create personal clouds to store data that they can access anywhere, without relying on a distant data center owned by Dropbox or Amazon. It’s sort of like buying and maintaining your own car to get around, rather than relying on privately owned taxis. Cook’s mission is to “make hosting a server as easy as using a desktop P.C. or a smartphone,” he said.

Like other privacy advocates, Cook’s goal isn’t to end surveillance, but to make it harder to do en masse. “When you couple a secure, self-hosted platform with properly implemented cryptography, you can make N.S.A.-style spying and network intrusion extremely difficult and expensive,” he told me in an e-mail.

Persuading consumers to ditch the convenience of the cloud has never been an easy sell, however. In 2010, a team of young programmers announced Diaspora, a privacy-centric social network, to challenge Facebook’s centralized dominance. A year later, Eben Moglen, a law professor and champion of the Free Software movement, proposed a similar solution called the Freedom Box. The device he envisioned was to be a small computer that plugs into your home network, hosting files, enabling secure communication, and connecting to other boxes when needed. It was considered a call to arms—you alone would control your data.

But, while both projects met their fund-raising goals and drummed up a good deal of hype, neither came to fruition. Diaspora’s team fell into disarray after a disappointing beta launch, personal drama, and the appearance of new competitors such as Google+; apart from some privacy software released last year, Moglen’s Freedom Box has yet to materialize at all.

“There is a bigger problem with why so many of these efforts have failed” to achieve mass adoption, said Brennan Novak, a user-interface designer who works on privacy tools. The challenge, Novak said, is to make decentralized alternatives that are as secure, convenient, and seductive as a Google account. “It’s a tricky thing to pin down,” he told me in an encrypted online chat. “But I believe the problem exists somewhere between the barrier to entry (user-interface design, technical difficulty to set up, and over-all user experience) versus the perceived value of the tool, as seen by Joe Public and Joe Amateur Techie.” READ MORE